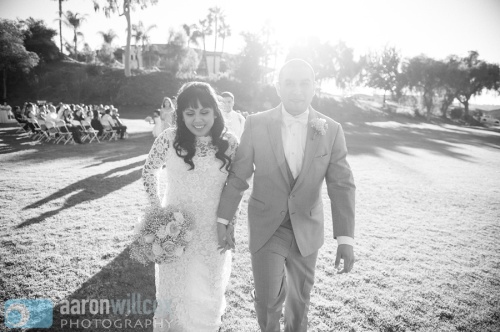 Alyssa and Ray got married on a gorgeous January day in the little Victorian Village of Heritage Park. How lucky are we in San Diego to be able to have a wedding completely outdoors in the month of January? 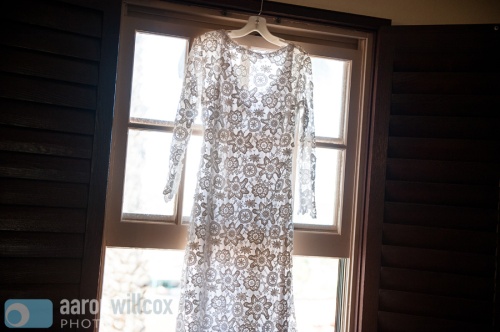 Alyssa with the most important girls in her life – her best friend (also named Alyssa!), her mother and her sister. 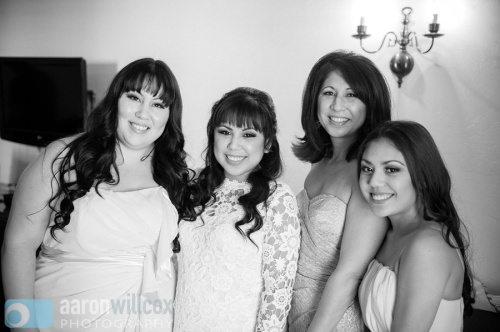 The way they look at each other… Such love!

The order of events was a little different than most, with their cocktail hour starting before the ceremony. After they did their First Look, they wanted to be with their family and friends through the entire process. As guests were enjoying themselves, the bridal party and families took pictures very close by as the guests watched.  When pictures finished, Alyssa and Ray joined their guests until they were ready to say their vows. It was the most adorable thing – Alyssa came to me with that shy-girl demeanor and smile and said, “I want to get married! Let’s do it!” 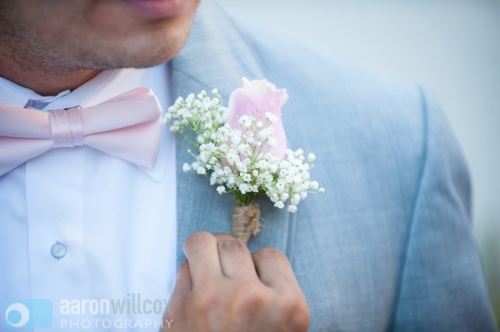 They wanted their guests to see them from all sides as they exchanged their vows, so they got married surrounded by their friends and family. 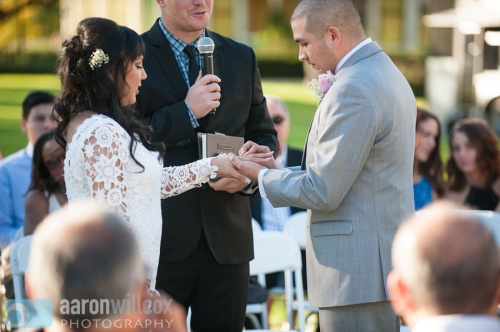 Because we were in the middle of an open Park, we had to bring in the rented equipment and tables and chairs, but otherwise, Alyssa and Ray brought in some great details all done on their own! 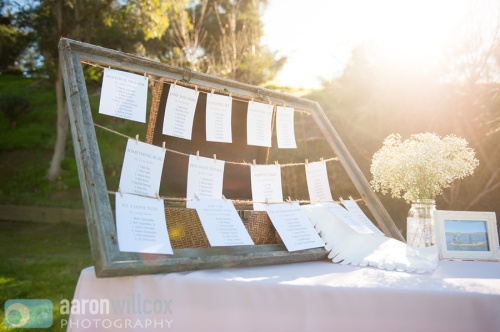 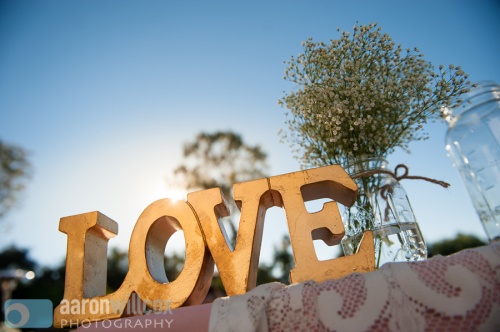 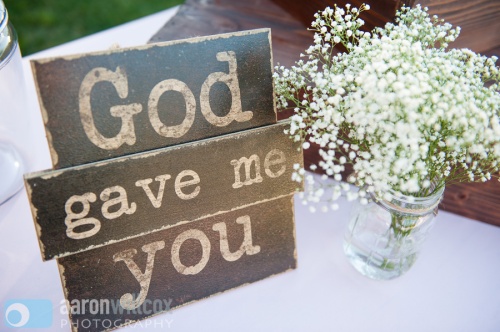 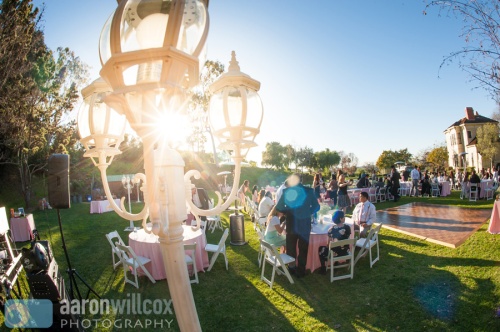 They feasted on salad, sliders and fries from Curiocity Catering Food Truck 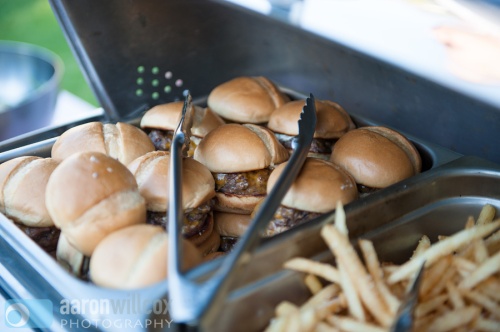 And the dessert display! Friends of Alyssa and Ray created all of this yumminess! There wasn’t much time to get pictures, as they were devoured very quickly after being revealed!

Alyssa and Ray just aren’t the dancing crowd, and that was ok, as no one missed it much! Alyssa and Ray did their First Dance as a silhouette, they provided games for their guests to play, and they played more interactive games on the dance floor. 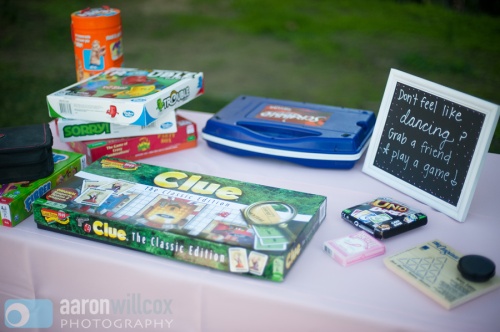 Although it did get pretty chilly and damp by the end of the evening, they couldn’t have asked for a better day! 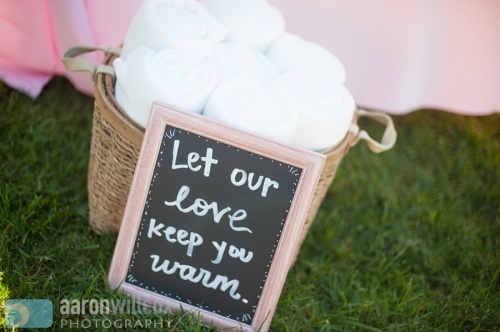 Since the Do-It-Yourself weddings and events have been such a big trend in the last couple of years, there have been conflicting feelings amongst Planners and other vendors throughout the Event Industry. The creative side of me loves to dabble in the DIY, but the Planner in me cringes when I hear that a bride has this in the plans for her wedding.

We realize there are many reasons for a bride to want to have a DIY wedding, which may include budget, a passion for craftiness, or maybe it’s that feeling that you might think you have the time and offerings of help from friends and family to get it all accomplished. Whatever your reason, there are things you should be aware of before you dive in.

For example, I had a recent wedding with a couple who did a lot of the DIY. Their main reason for this wasn’t because the bride wanted to show her crafty side – they were intent on saving money. While I understand that some just can’t afford the wedding of their dreams, there is a way to still have a beautiful and stress-free wedding while still keeping within your budget. Buying linens, napkins, overlays, charger plates, cake stands, etc., may not be saving you any money at all in the long run.

In addition to all of the things that were bought and not rented, and the logistical struggles to make sure everything got done, the couple hired an unknown florist up in the Los Angeles area (we are in the San Diego area). This florist had been hired prior to signing a contract for my coordination services, so this is not a vendor I would have recommended. The bride and groom felt they were getting an incredible deal for centerpieces that included mostly roses. However, part of the “deal” was that they had to pick the flowers up and drive them down to San Diego themselves. This also meant that they had nowhere to keep them stored and cool overnight to keep them fresh. There was also the intent that they had plenty of help from friends and family to get them delivered to the venue and set up.

Unfortunately, this whole scenario back-fired on the couple. The day before the wedding, the bride was in LA picking up the flowers, and I received a text that said, “The rehearsal is cancelled”. It was already 3pm, I was already down at the rehearsal site waiting for everyone, and there was no way they were making it back down to San Diego in Friday’s awful traffic to have their rehearsal at their scheduled time. I ended up on the phone with her and I could hear in her voice that she was about to burst into tears…she was telling me that the flowers were all wrong, and they were hideous. The florist had purchased the wrong color roses. The florist made no attempt to correct their mistake, and sent the bride along on her way with these awful concoctions!

In addition, I also received more texts at 8pm that night telling me that her bouquets didn’t make it after they made the drive back down to San Diego. They died in transit. I spent the evening contacting a local wedding florist, who was amazing and saved the day! This was no easy feat, as the wedding was taking place at 10am in the morning, and she still had to go to the market to purchase the correct color roses! Unfortunately, we weren’t able to get their centerpieces and their altar arrangements redone, so the couple still used the bad ones for the wedding (they were still alive at least). The bride did receive the bouquet she dreamed of with the correct color of roses, and it was beautiful!

The picture of the bride’s dream bouquet that she provided to the original florist:

The bouquets that died:

As you can see, even if the bouquet had not died, there are so many things wrong with this bouquet: 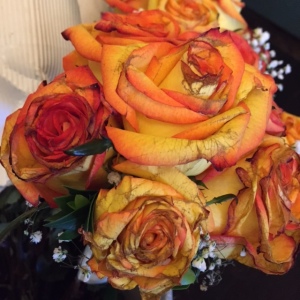 The bouquet that our fabulous local wedding florist provided at the last-minute: 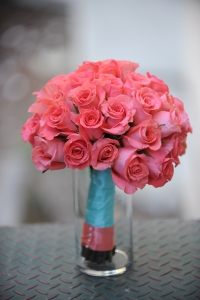 It was a beautiful celebration, and everyone had a fabulous time at the wedding, in spite of all of the extra work and effort on everyone’s part, along with the extra money that had to be spent to correct mistakes at the last minute. In the end, this is all that matters, right?

But you have to ask yourself – Is it really worth it to Do-It-Yourself?

I do believe that with proper planning and research, DIY can be achieved. Without the knowledge of the workings of the Event Industry and what it takes to accomplish the incredible task of making sure it all goes without a hitch, one’s efforts may be futile. Start off on the right foot and hire a coordinator in the beginning of your wedding planning! We are only here to help so situations like these don’t take place!

Well, the New Year celebrations have already come and gone and it’s already February, but I had a rough ending to 2014, and a rocky start to 2015, both personally and professionally. I think it’s time to start fresh with new beginnings! The first new beginning is this new blog. I hope to be posting so much more than I was before! Looking forward to some awesome events with some wonderful clients, and things are already off to a great start!

Although 2014 seemed to be a rough one in the Event Industry (I know I’m not alone in saying that), let’s not make this a negative blog post – there were some good points for sure!

The favorite part of 2014 was working with Melissa Petri to create my new branding. Let’s face it – I never really had my own look and logo, and I needed to change that if I was going to move forward with my business. So I started working with Melissa, and I had the best time! I probably drove her a bit crazy going back and forth with the design and colors of my logo, but she was a trooper putting up with me, and my decisions were finally made.

Once Melissa created the masterpiece, it was up to me to get my new website up and running. Since I create and maintain my website on my own, it took more time than I’d hoped, but I finally launched my new site in late November! So excited to have it finished! I hope you will check it out.

Although it’s a late start, I’m so excited for 2015! I’ve already gotten a couple of weddings and a corporate event under my belt in January to get things going.

In 2015, things continue to grow, I have some fun new clients, I get to work with former clients on new events, and there are some great vendors to work with! Let’s go!